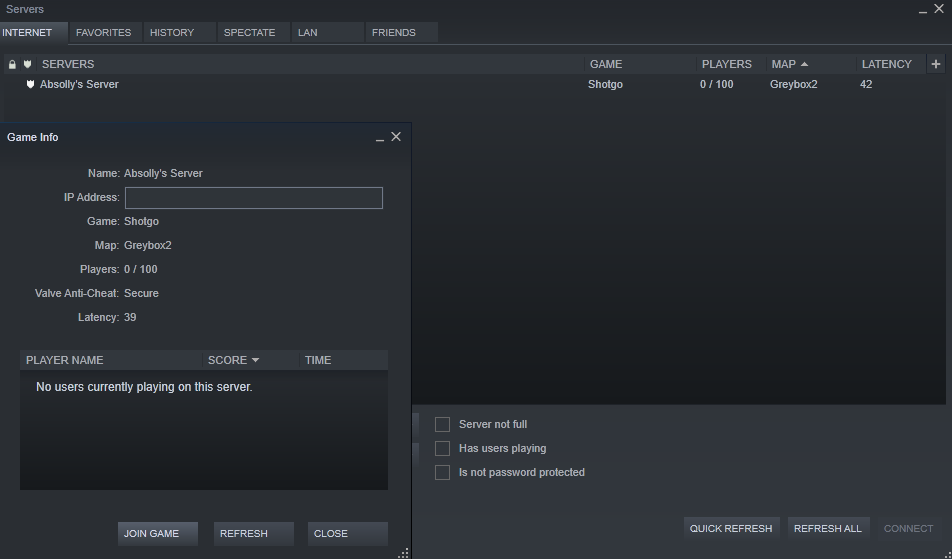 As part of my multiplayer game project Shotgo (working title) I wanted to implement the Steam SDK to gain access to Steam's stats, matchmaking and friends systems. Luckily, Unreal has an official plugin which implements the Steam SDK. Unfortunately, however, that plugin is missing some important features and is even broken in some places. To add some of those missing features I am also using the Advanced (Steam) sessions plugin which is made and maintained by a community member.

What does the Unreal OnlineSubsystemSteam plugin provide:
Well, for the most part, it handles the binding of the Steam SDK's API callbacks to functions that we can use. There are unfortunately some missing. In my case, I needed to manually edit the plugin to add a binding for the GameServerChangeRequested_t callback to allow players to join through right-clicking a friend and selecting "Join" if the friend's game is in progress.

Why use Advanced (Steam) Sessions:
There are two main reasons to use advanced sessions. Firstly, it exposes a lot of matchmaking functionality to blueprints, this makes a lot of UI work like making a server browser a lot easier. Secondly, it has a neat system for adding extra tags to your server which can be used to filter the match results based on custom options. Unfortunately, the creator of this plugin made it with the intent to not replace the official OnlineSubsystemSteam plugin but to instead build upon it without changing it directly (to not give Epic games a reason not to fix the problems with their official plugin). So besides adding a bunch of cool functionality, this plugin is limited to what it can do as a separate plugin.

The first problem I ran into in trying to get Shotgo to work with Steam matchmaking was setting the game name and server name in the Steam server list. To change this I needed to change a couple of defines in the OnlineSubsystemSteam plugin. I ran into a problem there. The OnlineSubsystemSteam plugin is installed at the engine level so in order to change these defines I needed to copy this plugin over to my project (Or I had to rebuild the engine from source). After moving the plugin into the projects "plugins" folder I was able to change the defines and server name variable in "OnlineSessionAsyncServerSteam.cpp" to make the correct info show up for my servers in the server list.

The Advanced Sessions plugin adds some useful functions to create and search for sessions. Unfortunately, most of the classes are specified with the MinimalAPI flag which prevents their functions from being accessible from other modules (like the game module in this case). This means that I had to remove those flags for the classes that had functions that I wanted to use in c++ from the game module. The main example of this would be the "CreateSessionCallbackProxyAdvanced" which provides a useful way of setting up the session with a bunch of parameters.

On top of that I had to check those in three different scenarios: Unfortunately, not all of these connection's are done the same way. Which meant I had to test and fix most of them in unique ways. To keep with the trend of pairs of three, here are the three different join game callbacks that steam uses. As I found out after much testing, not all of these callbacks are properly implemented in Unreal. The GameServerChangeRequested_t is not event bound at all by default so I ended up adding that one myself and implementing it mostly based on the GameRichPresenceJoinRequested_t implementation. The final problem I ran into with invites was the connection string that was passed with the invite for players that were not in the game yet. It seemed that the default argument that was added to the launch command when the invite is accepted is not actually a valid Unreal command line argument so I had to change the connection string setup when sending an invite to get this to work correctly.

And then finally, I had to come up with a way of testing this. This requires some way to have two steam accounts available, preferably on the same computer that can both launch the game and send each other invites to join the server. One possible solution that I found was to use a tool like Sandboxie to get two steam clients to launch at the same time. However, when I tried this I still was not able to join the same server from the same computer twice. So I decided to instead use a virtual machine to run the second steam account and client. One thing I had to take into consideration here was that I needed a VM that was capable of launching Unreal games, which means it has to support DirectX 10 at the very least. I ended up using VMWare Workstation Player as it meets that requirement and is free for non-commercial use. I installed an evaluation copy of Windows 10 onto it and set up a shared folder on the host so that both the VM and the host can launch the game from the same location. This allowed me to test all the steam interactions.

Unreal Engine's Steam SDK implementation is far from perfect. It does, however, get the job done. I was able to set up steam matchmaking, inviting and joining friends. I was also able to use steam's achievement and stats system. Having these services available, hosted on valves servers will be a great boost to our project.

I am a game engineering student. My favorite topic is shader programming, so far I have experience working with Unity Engine, Unreal Engine 4 and I have made/worked with custom OpenGL/DirectX engines in C# and C++.